On Tuesday, Pawlet and Rupert both voted to maintain designation to New York State high schools, and to reject school choice.

This is going to sound weird, but as disappointed as I am about the results of the vote, I’m really proud of Pawlet and Rupert. Both town clerks reported an unheard of turnout for our two small towns.

You could say, “But they were coming to vote for president anyway!” and that’s true. But Election Day wasn’t the only time people have showed up on this issue. Since way back in July, when I started covering the (now-dissolved) Pawlet/Rupert/Wells Merger Committee and p

osting blogs about their progress I’ve watched the Act 46-related public meetings grow from audiences of one or two people, to well over a hundred. And these were not just ordinary meetings; these were long, three-plus-hour meetings, standing-room-only meetings, emotional and rancorous at times. Not just adults, but kids showed up and bravely made public statements on both sides of the issue. Heck

, kids from other towns were showing up, just to hear our version of the debate, to see what our town was going to do.

I think we’ve all come to know way, way more about educational law in Vermont than any one of us probably thought we would ever need to know.

So now, at long last, we have actual numbers as to the will of the townspeople. Although it wasn’t a landslide, it wasn’t exactly razor-close either: in Pawlet 413 voted for designation, 306 voted against. In Rupert, it was a similar margin: 235 in favor, 145 against. 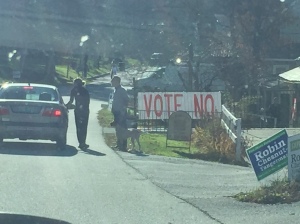 Clearly, the majority of people in our towns feel that school choice is a luxury we simply can’t afford. They believe it despite all the arguments that have been made to the contrary: even if designation means exploiting a loophole of New York State law, even if it means we have no say in how the educational system is run, and even if that means our Vermont kids can’t freely go to a Vermont school… public or private.

For a long time I thought that opponents of school choice in our area just must not have all the information. And so I made it my business to help get more information out there. And guess what? I was wrong. We still disagree.

So that, as they say, is that. 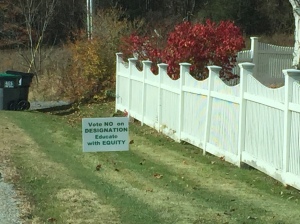 Who knows what will happen next? Nobody. Maybe another merger committee will be attempted, but I doubt it, since we’re surrounded on all sides by communities who have opted for school choice. Maybe we’ll just keep going along with things as they are, unchanged, until the day that someone comes along and tells us we can’t anymore. If that ever happens.

But my biggest hope now is for our community to heal. The school issue has been so divisive along so many lines, that at times it has felt like Act 46 was tearing our town limb from limb… pitting young versus old, “born-here”s versus newbies, those who are struggling to make ends meet versus those who are not. I think the key to moving forward is rooted in being proud of the fact that we all participated, and not just a little, but a lot.

I mean, did you see all those signs out there on Election Day? If you were in our area you could hardly have missed them. Printed ones, hand-lettered ones, sheets, banners… they were everywhere.

Outsiders driving through must’ve thought the entire town was having a schizophrenic seizure or something. I kind of loved it. It was evidence of a thriving democracy, in which each person really does feel like their opinion matters. And in our town, it really does.

No matter what, you can’t say we suffer from apathy around here. I’m glad that we are a community who doesn’t leave our important decisions- no matter how painful they may be to make- up to someone else. We can all be proud that on last Tuesday we did the most important thing of all: we showed up.