I’m happy to spread the word that the Pawlet Library Board is hosting an informational meeting about the $300,000 proposed elevator project, which will be on the town ballot for the March 3 vote.

A letter announcing this was sent this week to every Pawlet resident, but for those who may have missed it, the meeting is from 2-4 PM on Sunday February 9th. (I almost missed it myself. Strangely enough, my flyer got lost in the mail.) 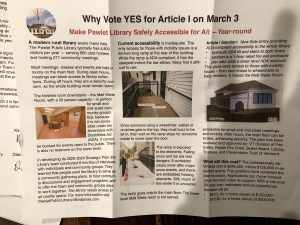 As a long-time library supporter who spent years on the Pawlet Projects Committee organizing and fundraising for the library renovation, as well as a former Library Board member, I feel that the more information we have about a proposed construction project for the library, the better.

To that end, there are some things that should be noted that are not mentioned in the library’s mailing that I think are important to know. Here they are, in no particular order:

1. The Library Board is not unanimous in its support of this proposed project.

2. The Select Board is not in unanimous support of this project.

3. No one had ever complained about access to the lower level room.

4. The library is currently to code and ADA accessible.

5. Grants will not pay the full cost.

6. The roads of Pawlet are in extreme disrepair.

Let’s take these points one at a time:

1. The Library Board is not unanimous in its support of this proposed project. The letter sent out is signed by four out of five Library trustees. The one omitted is the one dissenting member. That member is Marty Kravitt, whose design for the original library renovation in 2002 was given as a donation to the town, and later won an award from the Preservation Trust of Vermont.

(Would you be surprised to know that his letter got inexplicably lost in the mail too?)

Ed Cleveland, you’ll recall, is the Selectman who responded to the library board’s concern about falling snow on the handicapped access ramp by hiring an architect from Rutland and spending over $12,000 of the town’s money to date on plans. The resulting proposed solution would put in an elevator to the basement, as well as adding a bathroom and kitchenette. This is how we mitigate falling snow?

3. No one had ever complained about access to the lower level room. I know because I asked at the Select Board meeting of Dec. 18 2018 and it is recorded in the minutes of that meeting. It was only several months after that fact was pointed out that reportedly two letters of complaint materialized.

Excerpt from the Select Board meeting minutes of Dec. 18, 2018

4. The library is currently to code and ADA accessible. The problem is not the access ramp, the problem is falling snow on the access ramp. There are other improvements that have been proposed to address this problem: roof snow guards or a ramp roof. Either of these alternatives would be a fraction of the cost of the proposed elevator.

At the same time, nowhere in the proposed plan is any mention made of another very real problem: the library’s crumbling front steps. Again, re-pouring concrete steps would be a fraction of the cost of the elevator proposal, and it’s something which- unlike the elevator- everyone seems to agree is desperately needed. Wouldn’t it be ironic if we spent $300,000+ to put in an elevator in the building rear, only to have a lawsuit brought against the town from someone who fell down the front steps?

5. Grants will not pay the full cost. The library pamphlet makes much of the possibility of grants to fund a portion of the project costs, but it is important to note that grants are hard to get and none are guaranteed. In addition, most of these grants are matching grants, meaning the town will have to come up with a matching amount of money to whatever grant is awarded.

6. The roads of Pawlet are in extreme disrepair. Considering a project of this cost when residential roads lie impassible, residents are unable to get to work or school, and 65% percent of the highway budget is already gone for the fiscal year­— when the Select Board is literally arguing over pennies on the tax rate to buy road gravel— is unconscionable. 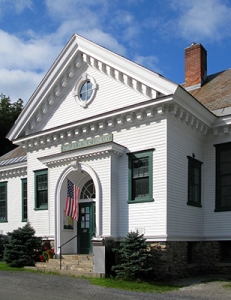 Lastly, I’d just like to mention a story I heard recently. I heard the other day about a person who said they would vote in favor of the library project because “we are Library People.” I too, am a Library Person. I took my children to the library for years to story-time, to Miss Dot’s Ballet classes, and to events like the holiday craft fair. I organized a birthday party to celebrate when the tenth anniversary of the library’s new home came around and I even baked the cake. I’ve donated time, money, books, toys and artwork to the library.

I am deeply saddened by the divisiveness of this issue, and I would like to dispel the notion that just because one opposes a particular proposal for the library, it means they don’t love the library. That’s like saying: if you don’t love the fact that our road crew is underfunded, then you must not love Pawlet. No- far from it. If you love something, and have an opinion about it, then I feel it is your obligation to get out there and fight for what you think is right, and makes sense.

This is why I argue we should Vote NO on Article 1 on March 3, because the library does need a solution, but this is not the right one.

1 thought on “Five Things Not Mentioned In the Library’s Mailer. Or Six.”